I met Jesse at the NW Sportsmen’s Show in 2003. A buddy and I went there to find a guide for fishing on the Oregon Coast. After trolling up and down the rows of booth after booth filled with men in their Crocodile Dundee outfits, eye-candy standing close by, wanting to show me the menu they serve up on “fishing” trips, we got to Jesse’s booth. We took an immediate liking to Jesse and his no-BS ways. With Jesse, it’s all about the fishing. We were on the water with him a month later. We fished together regularly until I retired from adidas (where I was responsible for Information Technology in support all of adidas and Reebok stores in the US and Canada) in 2008. It took a couple of years to recover from the shock of the Great Recession before I could collect enough spare change and turn in enough bottles and cans to start fishing again. Once back on the river with Jesse, I was glad to see that Jesse was the same; still wearing out his boats, trucks, gear, and his body to make sure his clients had a great fishing experience. I’ll keep fishing with him as long as I can climb into a boat. Josh H. -

Some of the best days of fishing I've ever had were while fishing with Jesse. My first trip was over 10 years ago, we fished the North Santiam for summer steelhead and spring Chinook. I'll never forget the day. It started out with an epic run up river in his jet sled. We stopped and fished a spot that Jesse knew held fish. He instructed us on where to cast and what to do when we get a bite. The morning was slow starting, one of the guys fishing with us questioned Jesse about the spot. Jesse assured us the fish were there. After a few more cast with no results Jesse asked my friend for the rod. Jesse made one cast, mid drift Jesse set the hook! Fish on... Jesse handed the rod back to my friend. We were all shocked. The day ended well we all caught fish, some of us caught steelhead and salmon. It was a great first impression. That trip got me fired up again on fishing for salmon and steelhead. During that day Jesse and I talked about another river that he was very passionate about. He told me stories about giant salmon and world class steelhead. I was extremely excited about coming to his home waters and chasing some of the fish we talked about. Since my first trip fishing with Jesse I couldn't tell you how many fish I've caught, more than I can remember. Some of the fish are very memorable. What I can tell you is that I've never fished with a more confident, knowledge, and passionate person. It is unreal to be floating down a river and have someone tell you to cast over there, there's one over there. And than you cast where was instructed and hookup. That has actually happened multiple times while fishing with Jesse. Jesse has made me a better fishermen. I have learned alot about reading the river and paying attention to what's working and what isn't. The river is different every day. What worked for us one day might not work the next. Jesse is so in tune with the river and surrounding area he knows what to do. We have fished so many different ways, all determined by the weather or river conditions. I have been on a bunch of trips with Jesse and I will continue to go on more. I already have my next trip booked with him. I could probably write a book about Jesse and all of our experiences. I'll finish with this. If you are looking for your first salmon or steelhead, Jesse is the guy. If you are a mediocre fishermen or woman, Jesse is the guy. If you are an experienced angler, Jesse is the guy. If you are have your own boat and you want a break from the oars and don't want to buy bait and tie leaders and deal with shuttling your rig, than Jesse is the guy! It doesn't matter what your level of experience is. Jesse can take you out and I guarantee you will not be disappointed. I hope you book your next adventure with Jesse, he is an elite guide and second to nobody. Mike -

Jesse and Sara, We are looking forward to fishing with you again. Brad -

Thank you for accommodating us. We are looking forward to seeing you again. Sharman -

Oh my goodness! We're sitting here listening to stories, prepping fillets, & taking pics. Thanks for making a great day and we're already talking about when to book next trip---Semper Fi, we'll probably see you next Corps Bday. My dad knew you were a great guide the minute he saw your bait (but damn those lefties reels, lol)...Seriously, you rock! Thanks! George -

Jesse and Sara, thank you for taking care of my friends and me last July. I enjoyed your company and friendship. Hope we can do it again soon. Pete -

Call today to book your Guided fishing trip! Come fish with us! 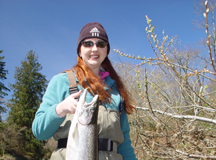 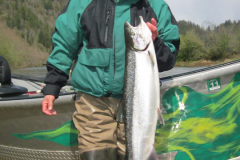 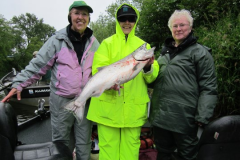 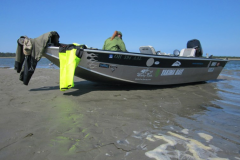